Can Women be Deacons? 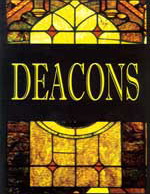 [1] In many churches, deacon boards hold more authority than the pastor. We dispute that pastoral authority from hierarchical 501c3 organizations is scriptural, but what does the Bible say about the office of deacon?

Scripturally speaking, is there such an office as deacon? Because if there is not, then the controversy over whether or not women can be deacons, is moot. It is not a valid argument, if there is no such “office” of deacon [as we know it today] found in the Bible.

In Ephesians 3:7, Paul, the apostle, called himself a diakonos, but he was not a deacon. Not a single scholar has ever claimed Paul was a deacon. Yet, the Greek word diakonos is almost universally translated as deacon (Strong’s G1249).

In Romans 16:1-2, Paul called Phebe (Phoebe) a diakonan. The Greek words diakonos and diakonon are the same word [both Strong’s G1249] and both mean either a female or male servant of God. The word is gender-neutral. The Greek interlinear based on Scrivener’s Textus Receptus, translates both words as thru-servitor. God calls both women and men as thru-servitors.

The word does not mean deacon as churches today define deacon. The seven we read of in the book of Acts, are commonly referred to as the first deacons. But where do the scriptures say that? It could be that they were diakonos [thru-servitors], but it appears the Greek words diakonos, diakonon, and the various other forms of the word [G1249], bear no resemblance to what modern Christians have been trained to believe a deacon is.

1 Timothy 3:10 diakoneitOsan / diakoneo (G1247) (Phrase meaning: let them be thru-serving, and not let them “use the office of.” Big difference.)

The word deacon as we know it today, has no place within the Body of Christ.