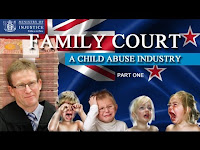 Our family court system is a gargantuan, abusive, monster. Reforms are urgently needed.
Over a decade ago, Phyllis Schlafly, wrote the Father's Day article,  "The Awesome Power of Family Courts". She was a powerful evangelical who was an enemy of women's rights. In that she was dead wrong, but she was right about the family court system. If only she had advocated as passionately for "parents" and for "mothers" instead of focusing on "fathers" only.
Mothers and children are the prime targets of abuse in family courts, and Schlafly was firmly in bed with the father supremist camp, run [for the most part] by woman and child abusers.
Schlafly's article was one reason I invited Janice Levinson co-founder with Lundy Bancroft of the Protective Mother's Alliance International to speak at the  Seneca Falls 2 Christian Woman's Rights Conference.
Little has changed within the family court system since Schlafly wrote that article. It is a shame her voice, still so respected among evangelicals, was not raised in support of  protective mothers and their children abused by a family court system that remains in dire need of reform.
Posted by Jocelyn Andersen