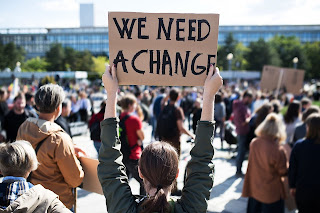 If the best-seller listings on the Amazon "Christian Social Issues" page is any indication, the state of the professing-Christian-book-buying-community is in sad shape. And that is a direct reflection on the failure of pastors to lead in a biblical manner and on individual Christians who need to become biblically literate.

I'm not saying books shouldn't be written about Christian social issues. They should. I write about them myself. But why aren't Christian shepherds teaching their flocks to follow Christ and feed themselves from the Word of God instead of jumping on the band-wagon of every divisive media narrative?

Social issues exist; and Christians often deal with them poorly. That is why so many [professing] believers write about them. Issues abound: Political hatred, religious hatred, woman hatred, white hatred, black hatred, Jew hatred, Asian hatred, gay hatred, and hatred of the unborn.

The only reason for any of this is sin.

Racism is sin. Regardless of which race practices it. Hatred against women is sin. Abortion is sin. Gender hierarchy is sin. Homosexuality is sin. But hatred against homosexuals is also sin.

Good heavens, Jesus lived in a society where homosexuality was rampant, openly practiced, and socially approved. Did he single that one thing out and make an issue of it, even though the scriptures plainly declared it to be sin? Did Jesus single out any social issue or people group to harp on? If not (and he didn't), why didn't he?

Because he is the Prince of Peace. He is the only way, the only truth, and the only life for everyone who chooses to follow him...regardless of where they come from.

Yes, choices must be made. Old must be traded for new. But Jesus leaves the door open for all to make their own choices. Why would anyone choose to belong a God who hates them?

It is not God who hates. It is fallen humanity. Schism within the Body of Christ because of social issues only exists because of the sin of hatred. Repentance is needed. Beyond that, the solution is so simple we trip right over it.

Jesus gave his followers only one response to every social issue that might confront us. And if practiced by everyone, his solution would tear down every fence that separates believer from believer. Are you ready? "Love the Lord your God with all your heart soul and strength and love your neighbor as yourself Whatsoever you would have others do to you...you do the same to them."

This doesn't mean we accept everything, but it does dictate how we respond to issues that would otherwise divide.

If every book we write confronts social issues from Jesus' perspective, then I say write-on! If it doesn't, don't write it, don't read it, throw it away. Don't support it with your money, time, or attention. And for Heaven's sake, don't promote it within your fellowships.

What if others don't extend us the same grace?

It doesn't matter. We must start somewhere, and it is the same place for everyone. We must each say [and put into practice] only one thing..."It starts with me. I will not return hatred for hatred."

For by this, all will know that you are my disciples. That you have love one for another...Unto us a child is born. Unto us a son is given. And the government shall rest upon his shoulders. And he shall be called Wonderful, Counselor, Mighty God, Everlasting Father, PRINCE OF PEACE.