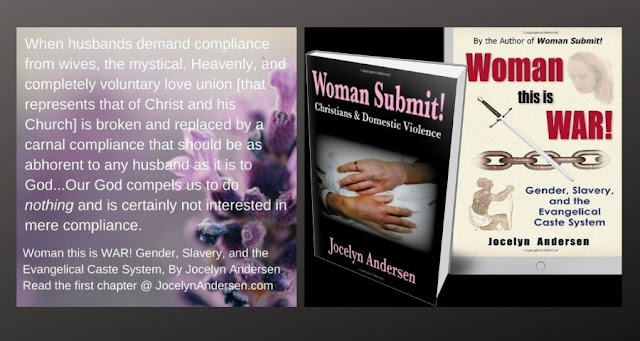 Woman this is WAR! Gender Slavery and the Evangelical Caste System, examines Bible commentary and translation practices which have historically been androcentric (male centered) and even misogynistic (anti-woman). These have adversely effected understanding of the scriptures, relations between women and men, the happiness of men and women, and, in general, has hindered the work of the gospel, by forbidding women to preach, pastor, or serve as elders or deacons. The book chronicles the early history of the women's rights movements, as well as the role of church leadership in aggressively suppressing both women's rights and the historical record of Christian initiatives within the movements. Through the complementarian movement, many of the same arguments used to support the institution of slavery, are still used today in suppressing the rights of Christian women. This book documents identical arguments used by Christian leaders against both movements and is an unparalleled resource for all who desire an in-depth study of gender equality from a Christian perspective. The history of women’s rights is traced back [much further than usual] to the very first feminists…who were Christians—godly women, who brought the issue of women's rights to the forefront as they struggled to alleviate the suffering of others, and found they were hindered in doing so for no other reason than the fact of their sex. This work, provides valuable historical insight into Christian initiatives in the movements for women’s rights, that are rarely included in Christian literature.
Posted by Jocelyn Andersen