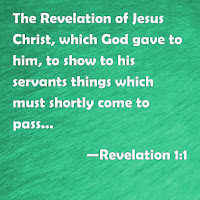 Revelation 1:1 as read in most Bibles, "The Revelation of Jesus Christ, which God gave to him to shew to his servants things which must shortly come to pass; and he sent and signified [it] by his angel to his servant John."
The Hungry Hearts Bible commentary Literal and expanded Reading:
The unveiling [of] Jesus Christ that THE GOD YHWH is causing to come forth [from] the same, to show the servants [of] the same, that [those things] which by a binding decree G1096 [and] in a sudden manner [will] come to pass and he [Jesus] sent to make it known by his messenger to his bondsman John

The English word apocalypse comes from word apokalypsis, which the words "The Revelation" in our Bibles is translated from. The Greek word apokalypsis carries a very different connotation from that which most English-speaking peoples connect with  the Revelation which means the revealing, the unveiling, things made clear. It is used of events by which things [or states or persons] that were previously withdrawn or hidden from view, are now made visible to all.

Many scholars agree with Larkin, who taught that the unveiling [revealing] is not the revealing of the person of Jesus Christ himself but rather the revelation of events that will occur suddenly, swiftly, within a short space of time, immediately prior to his return to earth [2nd Coming] at the battle of Armageddon.

The Revelation is not meant to be a cryptic book impossible to understand. It is meant to be understood. And to underscore this, a blessing is promised to those who take the time to read (and take to heart) the words of the prophecy contained in Apokalypsis.

Both individually and collectively each member of the Godhead is called Yahweh (YHWH). In Acts 17:29, Romans 1:20, and Colossians 2:9, we read that all the fulness of the Godhead resides in Jesus in physical form. That means that Jesus participated in all conversations within the Godhead and with the decision for the Revelation to proceed from the Son to the messenger and to his servant, John. Therefore, Revelation 1:1, cannot be used to establish hierarchy within the Godhead. 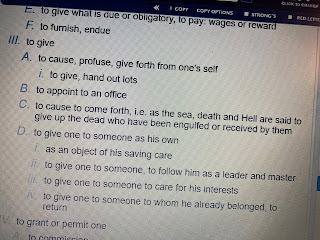 Examples where didomi should not be translated as give or gave:

Matthew 28:18 is a perfect example of hierarchical-English-translation-theology obscuring the true meaning of a Bible verse. In this verse, most English translations record Jesus as saying that all power in heaven and earth was given to him. The hierarchical assumption is that this power was bestowed on him as a gift to a subordinate from a superior. What Jesus really said was that all powers in heaven and earth were surrendered to him—surrendered to the man Christ Jesus—the risen human.

The powers that are surrendered to him are the powers of darkness Paul writes of in Ephesians chapter six. Whether these powers like it or not, they will be forced to acknowledge that Jesus is YHWH, to the glory of God the Father. Philippians 2:10-11, speaking of Jesus, is a quote from Isaiah 45:23. See also Romans 14:11. These verses alone prove that Jesus is Yahweh, but these verses are not alone. There are many more.

The Godhead is YAHWEH

They have each been scripturally identified, individually and collectively, as members of the Godhead, YAHWEH

The things that are decreed and will come to pass in a "sudden manner” [and/or will be completed within a short space of time] are the events of the seven years immediately preceding the 2nd Coming of Christ at the battle of Armageddon.

John was not told the things he was seeing would happen "shortly." That is an unfortunate translation that has caused untold and unnecessary controversy. John was told the events revealed to him would occur in a "sudden manner" and be accomplished [run their course] within a very short space of time.

The Revelation contains four types of language, not three: 1.) Literal: John’s descriptions of what he sees in heaven are to be taken literally, as should some [if not all] of the spiritual phenomena he describes 2.) Figurative: This language is defined within the context of passage 3.) Symbolic: All symbols in The Revelation are unlocked and defined somewhere within the volume of scriptures) 4.) First-Century Descriptive, which should generally be taken as literal. John saw things not yet invented and thus described them as best he could using only the vocabulary and terms available to him in the first century (e.g., how would someone in the 1920’s have described a smart phone or a laptop?).

The messenger John conversed with, was not an angel. Connect the dots all the way through the Book of Revelation from Chapter one verse one (1:1) to chapter twenty-two verses eight and nine (22:8-9), and we see that the messenger is a fellow believer, one of John’s "brethren," a prophet.

Questioning scholars is a legitimate exercise. Having so many resources, contrast and comparison is much easier done today than at any time in history. This writer has found contradictions in many famous works, including the Strong's Exhaustive Concordance, and W.E. Vines Expository Dictionary of New Testament Words. These are awesome resources, but they not infallible. No resource or teacher is. Always keep that in mind.

There are options as to how Revelation 1:1 is translated from Greek to English. And those options drastically effect the way that verse is understood.

Do you have questions, comments, or prayer requests? Leave a comment below or call our comment line at 863.614.0439.

You can contact Jocelyn through the contact form in this blog, where you can request a free copy of her book, Redemption; Bible Prophecy Simplified, A study of HOPE. The book is an excellent prerequisite to any study of the Revelation. 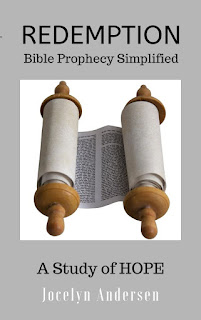 “I have been studying Revelation, and this work has helped me in that study.” –David (GA)

"I have been a Christian for only one year. This study was very easy to understand and has strengthened the foundation of my faith.” –Jason (NJ)

It is not long and drawn out but simple, concise, and understandable. I was impressed with the positive reinforcement that God is a redemptive God who has made Himself known through His Word, and in these last days through His Son, Jesus. I appreciated the emphasis on The Holy Spirit being able to teach. I also like that the author weaves scripture throughout the writing. –Mona (MO)

I love how this all fits together so well! It totally disproves the idea that the Catching Up and the Second Coming are one and the same. –Samantha (USA) 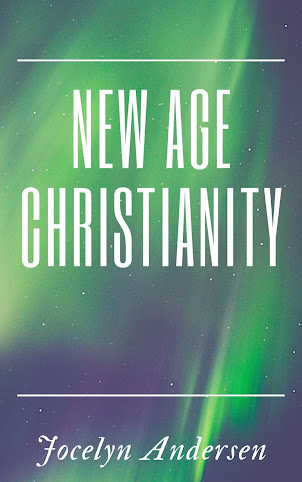 Click book cover to receive alert when it is released