If women can't teach men, then men should never read an unredacted Bible 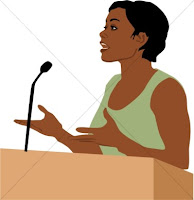 If it is true, that scripture forbids women to teach men, then men should never read an unredacted Bible.

All words spoken by women should be stricken from Bibles intended for men to read.
Ridiculous idea isn't it?

Almost as ludicrous as the idea that women are forbidden by God to publicly speak words that might teach and lead men in paths of righteousness.

Remember the ancient rabbi who said he would rather the Torah be burned than taught by a woman? He said this despite the fact that the scriptures he taught, are filled with the inspired and authoritative words of women speaking the Word of God, and unless those words are stricken from the record, men who read them cannot help but be taught (whether they learn or not is another question altogether).
What happy news it is, that when rightly discerned, the Word of God is clear, that our Creator has always used his daughters as well as his sons to teach and preach his awesome WORD?

Your sons and your daughters shall prophesy
Joel 2:28

Your sons and your daughters shall preach
Acts 2:17

And on my male servants and on my female servants I will pour out in those days of my Spirit and they shall prophesy
Acts 2:18
Posted by Jocelyn Andersen