Eve's Name was not Eve 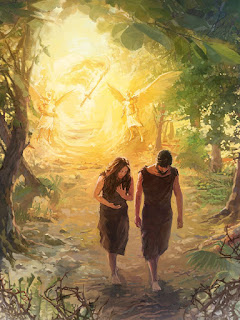 The name of the first woman was not “Eve” but rather the Hebrew name, Chavvah [pronounced Kavah]. God did not give her this name. It was given to her after The Fall by her husband, who was never commanded or commissioned by God to name his wife.

Portions of this post are excerpts from the Hungry Hearts Bible Commentary.

The name “Eve,” comes from a Greek transliteration, which transformed the Hebrew name, Chavvah [meaning "Life"], into a series of Greek letters forming the word, Ava [which has no meaning], and from there, to the English name, “Eve”  [which likewise has no meaning past its historical connection with the first woman].

Eve is generally cloaked with a literary and theological burqa, invisible except for the magnitude of her sin which covers every inch of her and undulates with ecclesiastical breezes in one direction or another, as she moves among us seeking a place of rest and redemption. When her name is paired with that of her husband, as in "ADAM and Eve," She becomes a clichéd misnomer in the minds of many, an ancient legend, a mythical person, her existence is sometimes denied even among professing believers.

What is difficult to understand, is why Bible translators, scholars who should know better, uniformly and consistently use the Greek transliteration of Chavvah’s name in the Hebrew portion of the Holy Scriptures. This is astounding and can only be attributed to a combination of antisemitism and misogyny. Because of this, the name, Chavvah is largely unknown to English-speaking believers. This is because the name in the Greek texts is **“transliterated from Hebrew to Greek, and not translated. And that, is the short version of how Chavvah meaning "Life" is transformed into Ava/Eve, names that have no meaning.

Credit where credit is due, goes to the Jewish translators of the Septuagint (the Greek translation of the Hebrew scriptures), these at least translated Chavvah's Hebrew name into a corresponding Greek name--Zoe. Both Chavvah and Zoe mean "Life."

The name Chavvah [Life] was bestowed on the first woman by the first man, because he said she was the mother of all living. At least, that was the reason he gave for "naming" her [just like he did the animals?].

Some claim he named her when he said "She is called woman because she is taken from man." This writer respectfully disagrees. He was not naming her in this instance,  She was called woman from the instant of her creation. God called her that and gave the man knowledge of it. No doubt it was an inspired utterance on his part, but the first man did not name the first woman when the LORD GOD presented him with his wife. He was simply stating what was already a fact.


Fact: Before he sinned, it never occurred to ***‘âdâm-**Iysh that naming his wife could lower the status of ‘âdâm-*'Ishshah to an inferior position, thus creating an illegitimate hierarchy that transferred de facto power over the female mortal to himself (and by extension "headship" to all men over all women). It is more than interesting, and more than coincidence, that during the time of his innocence, such a though never occurred to the first man. But it occurred quickly enough after he sinned. The first man's power-grab was the smoothest and most successful in history.

*'Ishshah: Hebrew for woman/wife
**'Iysh: Hebrew for man/husband
*** ‘Adâm (pronounced: audawm): The name the Creator called all people (Genesis 5:1-2)
And there was absolutely no resistance from the woman!

Was the first woman so relieved her husband was no longer angry with her that she failed to notice that allowing him to name her, appeared to place him in charge of her by lowering her status to that of the animals [he had been privileged to name before she was created]? Never-mind that God had commissioned the namings so Iysh could be made aware of the fact that as the animals needed equal and opposite counterparts, he also needed of one].

Following are a couple of proposed reasons for the uncontested coup: 1.) The woman felt relieved and flattered. Flattered by her husband giving her a name that means "Life," (considering her recent actions in precipitating death and ejection from Paradise). 2.) Relieved because the couple had just had a major rift when the first-husband attempted to throw the first-wife under the bus, while trying to save his own skin by volunteering hers. How horrified she must have been when loyalty fled and he blamed both God and his wife for the fact that he voluntarily disobeyed the command concerning the fruit. No blow was too low to save himself, despite that there is no scriptural evidence that his wife pressured him to disobey God or that he resisted the temptation at all. He eagerly tasted the fruit (we know it wasn't the fruit that brought death. It was the disobedience). So, given all the drama and blame-shifting [and no doubt anger and recriminations] that took place after "bite-remorse" set in, when Iysh finally appeared to calm down and give 'Ishshah a name as wonderful as "Life," she must have felt tremendous relief that she was back in favor with her husband.

Was ‘âdâm-'Ishshah so relieved that she and her husband had finally "made up," that she either did not notice or chose not to comment on the fact that he had just usurped her name, the name given to her by God [and to the entire mortal creation]. No matter, from that point on, in his eyes, the name ‘âdâm would be applied only to himself.

God's male creation, co-named as ‘âdâm equally with God's female creation, had now become "ADAM," top dog. The name was his and his alone.

This was the first fulfillment of the prophecy, given to 'Ishshah (Genesis 3:16), about how sin would transform her previously gentle gentle husband into a power-hungry creature Genesis 3:16.

Contrast how 'iysh had been content to co-reign-over/co-manage all other creation along with his wife before he sinned. It was only after he sinned, that he chose to dominate his wife and manage her. In order to accomplished this, his first move was to usurp the name ‘âdâm for himself alone.

He stole it when he "named" his wife, Chavvah. It was a brilliant strategy, a coup d'état of stellar proportions, and a total success.

Forever after, he would be known as ADAM--the one who the entire race was named after--inaccurate as that may be. And ‘âdâm-'Ishshah would lose even the complimentary, Chavvah--which means "Life."


Chavvah, would never be translated accurately in the Hebrew portions of Christian Bibles. The entire world, throughout history would forever know her as "EVE," a name which means nothing at all. Again, to credit the Hebrew translators of the Septuagint, they did actually translate (as opposed to transliterate) Chavvah into the Greek, Zoe (G2222 which also means "life".

Yes, you read correctly. The transliterated word "Eve," does not even have a real meaning. And the very first woman, ‘âdâm-'Ishshah, has been hidden from the collective view--except for her sin (but even that is considered second rate as compared to ADAM's). Chavva has been covered from head to toe in a literary and theological burqa--forever invisible and marginalized.

Although online Strong's concordances (such as the one on the Blue Letter Bible website) assign the meaning of "Life" to the name "Eve," this is not accurate. It is done presumptuously, as can be seen in the Strong's original concordance published in 1894 (not the contemporary "Strongest Strong's" or the "New Updated Improved Strong's" etc., et al..). In the Original Strong's Exhaustive Concordance, the definition of Eve G2096, is simply "The First Woman."

But Chavvah is a lovely and accurate name, so how could an evil motive be ascribed to it? Remember Caiaphas, who predicted the atoning death of our Savior. God allowed him to say something that was absolutely true, but the motive was absolutely evil.

The first man, gifted with an awesome intellect, struck the first blow in the war between the sexes. And he did it using the name. It was a stroke of genius. He won the first battle through diplomacy. He gained the ascendancy and conquered peaceably...by flattery. Equal in creation and equal in The Fall, the fact that the first man took it upon himself to "name" the first woman, showed the depth of his new-found contempt for his now-fallen wife.

The fact that she meekly absorbed the blow without argument or retaliation was an immediate and direct fulfillment of prophecy and attested to the strength of her desire for a restored relationship with her husband. Her turning, just as the LORD God had predicted, was in the direction of her husband. This set precedence for traditional-role-religionists and complementarians to adopt that moment in history as their moment and forevermore claim the first man possessed a God-given authority that the scriptures never assigned.

The first woman, 'Ishshah, (later called, Chavvah), accepted the usurpation of her God-given status and co-title of ‘âdâm. this was sin manifesting in her own fallen life. Her Creator had told her this would be her weakness and the consequences of turning to husband over Creator would be severe (this sin would easily beset all womankind):  Her "turning" would be to her husband instead of to her God, thereby feeding her husband's sin (one that would easily beset all mankind). One of the results of his sin would be a strong desire to dominate his wife.

History has shown God's predictions to be true in the case of men and women, and contemporary statistics [on world-wide violence against women/marital violence and abuse], show that little has changed from the day the first couple was ejected from The Garden.

The first woman's name was never Eve, And the Spirit of the Living God never approved, commanded, or commissioned the literary and theological burqa that men, cultures, denominations, and churches have draped her with and so zealously guard against removal of.

The good news is, that despite the success of ADAM's coup, after The Fall, God, in His Word, continues to recognize the functional equality of both sexes by calling all people--women and men--'âdâm.
Posted by Jocelyn Andersen