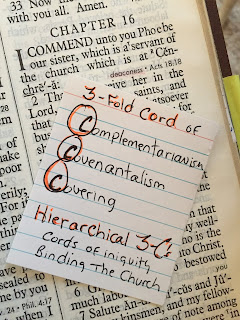 Presently, the Body of Christ remains largely bound with the hierarchical 3-C's of complementarianism, covenantalism, and covering. But these cords are ever loosening as the truth of equality gently undermines the iniquitous paradigm of priest-craft that binds God's people [both women and men] in illegitimate servitude to the ruling class of Christian leaders, who are usually men (not criticizing men in leadership, simply stating the obvious and unarguable that it is men and not women who compose the largest segment of church leadership).


Complementarianism is a System within Christianity where only two groups exist--male and female. Gender defines roles that men and women are born into and from which [according to all complementarian teaching] they can never deviate from, in either this life or the next. So that makes it caste, and not class.

Cast is where a person is born into a hereditary social class.

In Complementarianism, men are born into the leading (ruling) caste and women in the following/helping (servant/slave) caste.

Thankfully, believing men and women are recognizing that complementarianism is not only untenable, but unbiblical and sinful as well. It is good to see steps are being taken to effect change.

Recently, I received a letter from a ministry that historically has held to the complementarian position and likely still does for the most part, but the letter was an announcement sent to thousands of their followers and supporters, that stated that they have determined to make the voices of women heard within their organization and to promote more women into leadership and teaching positions.

That was good news indeed!

Covenant[alism] restricts membership of churches to those [and only those] who fit the "profile" of docile obedient sheep. Church members must not only know their place but are required to agree in writing to stay in their place...or leave. This harks back to the Church Growth / Purpose Driven Church movements and undermines the love relationship which should exist among the brethren. Covenant church membership transforms kinship into contract, God's living organism, his BODY, which is composed of LIVING STONES into a hierarchical organization, which has no life in and of itself.

This article does not speak to organizational, administrative, and leadership Gifts of the Holy Spirit which this writer wholly supports.

Paul said "Follow me as I follow Christ," but covenantal leadership says, "Follow me because you signed a contract saying you would, and if you don't like how I lead, don't rock the boat by saying so, just leave quietly."

Covenantalism has no place in the Body of Christ where the Law of Liberty and Spirit of Love should be our guiding principles and motivation for accountability to one another--not legalistic covenantal contracts.

I implore pastors and leaders to step out in loving faith and courage to cast out covenants, which are merely tools used to control  members.

Thank God it easier to join HIS CHURCH than most 501c3 Christian Fellowships, today!

Lastly, the idea of "Covering," is a remnant of the discredited Shepherding Movement that many pastors still find useful in keeping church members under control but should discard as quickly as possible. It is a tactic used by cults to engender fear in members who might otherwise get the dangerous idea that adults are autonomous beings capable of reading and understanding the Word of God for themselves and are in no need of "middle-men" to be the voice [and interpreter of the voice] of God in their lives.

The Ministry Gifts and Gifts of the Holy Spirit are given to equip the Saints--not to control the saints.

The biblical idea of "covering" means protection. The biblical application of "covering" means God does the protecting, the Holy Spirit protects, there is protection in understanding and obedience to the Word of God, but people can protect other people only in the sense of physical protection, providing safe environments to flourish in (as parent should for children), or by giving good advice or being good examples.

There is no inherent "covering/protection," spiritual or otherwise, provided for autonomous adults by simply submitting to a church organization or any human being whether pastor or husband.

The Bible says a three-fold cord is not easily broken. Sometimes a strong three-fold cord is a good thing, but the three-fold cord of complementarianism, covenantalism, and covering is not. The hierarchical 3-C's are cords of iniquity that harm people and hinder the Gospel. Once an Insider, Now Without a Church Home, is an excellent book illustrating the harmful effects of Covenant Christianity in the lives of one Christian family.

There is nothing inherently wrong with providing boundaries and accountability. It is a biblical concept and is generally good practice which makes for peaceful families, church fellowships, and societies. But when mandated gender-roles and signed contracts are added into the mix, and these things become focal-points of church membership, it shows just how far from our First Love mainstream Christianity has strayed.

Jesus called his disciples [and by extension all believers] "friends." Do we require our friends to sign covenants of "accountability" before we will commit to relationship with them? How many friends would we have if the basis our friendships rested on the legalism of contract rather than common interest, sincere hearts of commitment, love, and loyalty?

The Bible says to owe no one anything but to love them. The caste system of complementarianism, which cannot be divorced from the false doctrine of covering, which in turn usually requires adherence to church covenants, all entail much more than love, and in fact, to work well, do not require love at all.

Contemporary Covenantal Christianity translates [as Shirley Taylor puts it] into "The Cold Heart of the Church." Church Covenants usually dictate gender-role-religion, usurp the work of the Holy Spirit, and supersede the Word of God in the lives of  Church members.

We still have a long way to go, but thank God Christians are hacking away at the cords of complementarianism, covenant, and caste, cautiously wading into and testing the Living Waters of Truth that Jesus said would set us free.
Posted by Jocelyn Andersen