Jesus Yeshua or Yehowshua? Does it matter? 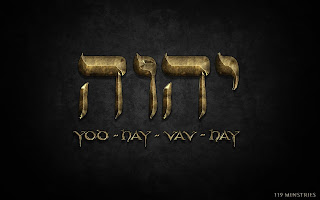 Does it matter what name we call our Savior?

Because our connection to our Creator is based on relationship and not legality or use of proper language, this writer believes not.

Jesus hears the praise, worship, and petitions of every true believer [even though that is not his real name] regardless of what name we know him by.

Some examples from real life of how this works, include names, nicknames, mispronounced names, and pet names. These are all used and answered to all the time. For these reasons, I do not believe my Redeemer holds it against me that I call him Jesus [even though I know that is not his real name] because that is all I have ever known him by. It is my familiar name for him and what I have always called him, and he has consistently heard me, answered my prayers, and allowed me to relate to him using that name.

However, in the interest of honest scholarship. In some instances, I choose to use his untranslated real name in my Bible commentary, "Notes From My Bible" (see footnotes). One of those instances is the very first mention of Jesus in the New Testament

In the current information age, accurate Bible knowledge is no longer restricted to scholars. And getting accurate information about THE MESSIAH should be a priority on every Believer's list.

1: The book of the generation of Iesous [ יְהוֹשׁוּעַ YeHoWSHUA] [1] THE ANOINTED THE SON OF DAVID the son of Abraham ... 16: And Jacob begat Joseph the husband of Mary of whom was born Iesous [2] who is called Christ
[1] The word, Iesous--“Jesus” was transliterated [not translated] from the Hebrew word יְהוֹשׁוּעַ  H3091 YHW-SHUA into the Greek H2424 IESOUS 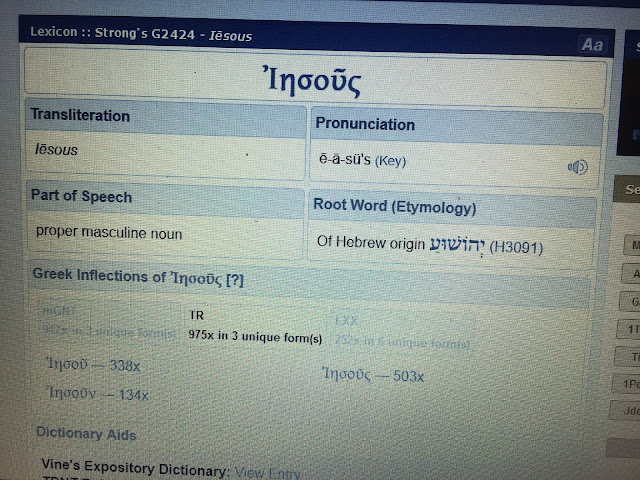 In the Hebrew texts, the name translated as “Joshua” contains the first three letters of the Tetragammaton, (The letters "YHWH" form the name of God/YAHVEH). The Hebrew letters YOD, HEY, and VAV, followed by SHIM, VAV, and AYIN, form the Hebrew name, YeHoW-shua [ יְהוֹשׁוּעַ ]. We know the name in English as "Joshua."

Translators know that the transliterated word Iesous should be honestly translated using either YeHoW-shua (untranslated Hebrew) or Joshua in English, so why won’t they do it? This writer believes the reason lies in deeply rooted historical antisemitism. 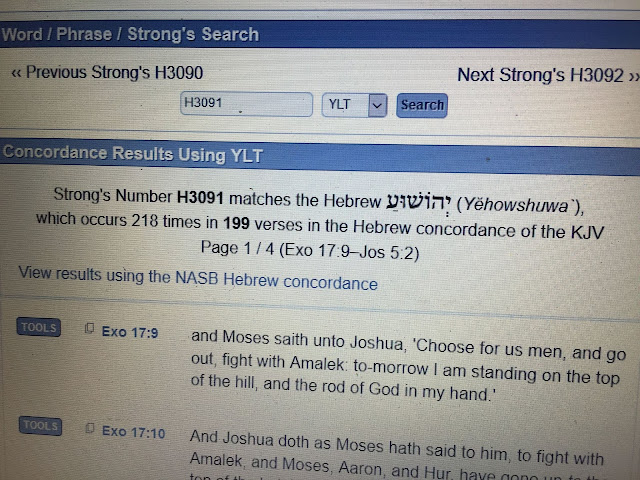 [2] G2424 pronounced ee-ay-soos: Iesous is the Greek transliteration of the Hebrew name Joshua. The names “Joshua” and “Jesus” both come from the same Hebrew word (H3091 [ יְהוֹשׁוּעַ ] YeHoW-SHUA) and are identical. For examples of how the two names are interchangeable, see Acts 7:45 (referring to Joshua as Jesus) and Hebrews 4:8 (referring to Joshua as Jesus) in the KJV. In both cases, the word “Iesous/Jesus” refers to the Old Testament character Joshua and is the same Greek word translated as Jesus throughout the New Testament. https://gotquestions.org/Yeshua-Jesus.html
What does the Christian take away from this? 1.) Honesty in translation is preferable to insider-knowledge that because of discrimination never makes its way into Bible translations, and then remains uncorrected for centuries. 2.) Jesus’ mother called him YeHoWSHUA (Yahveh Saves), not Jesus. This writer believes personal names should never be translated—simply publish them as they are originally, and leave them that way. 3.) The names "Jesus" and most especially "Jesus Christ," are traditionally, historically, and intricately linked to Christianity and THE ONE TRUE GOD, despite transliteration. Most people, including our Savior, know who we are talking about when we call him Jesus, so the subject of what his mother called him should not be a point of contention among believers. But neither should the subject be avoided. It is a legitimate part of Bible study and discussion. What to call THE WORD WHO BECAME FLESH AND DWELT AMONG US, within reason, is certainly optional [and deeply personal] as to how one addresses their Creator when speaking to or about him.
Posted by Jocelyn Andersen