Margaret Fell: A Woman with an "Agenda" 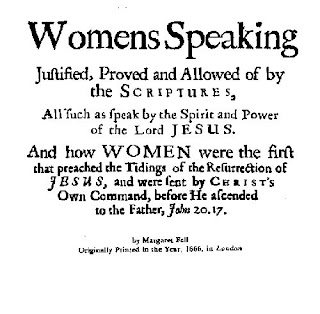 In honor of Women's History Month, The following is an excerpt from my book, Woman this is WAR! Gender, Slavery and the Evangelical Caste System:

Margaret Fell
Margaret Fell lived in the Seventeenth Century, and is credited with being the first feminist. Her cause? The right of women to preach the Gospel.

Co-founder of the Society of Friends, the Quakers, and called the Mother of Quakerism [1] Fell is credited with being the first woman to publicly advocate for the right of women to participate in the public arena and to be involved in the leadership of the church.

In 1666, she became the first woman to publish a fully developed treatise on the right of women to speak publicly.[2] Her argument was compelling and based entirely on scripture. There is no record that, during the course of pursuing her “agenda” of helping to establish the Society of Friends, and the equal rights for women promoted within that society, that Fell ever abandoned her faith in the God of Abraham, Isaac and Jacob, or forsook her family to embrace an immoral lifestyle. Fell’s husband, Judge Thomas Fell, trusted her entirely with the running of their estate while he traveled extensively in the course of carrying out his duties.

The Society of Friends acknowledged the practical equality of all people from their inception. Although it took them a while to learn how to implement the concept, they did finally succeed, and as a result, many “Friends,” both men and women, became involved in the early movements for women’s rights.

The first national Woman’s Rights Conference was organized primarily by women who had already gained experience in public speaking, administration, and organizational skills through their activities in Quaker meetings. As the first woman to speak publicly in the United States was not permitted to do so until 1836, the providence of God is evident in preparing Quaker women for public speaking and in providing them with opportunities to gain the organizational experience needed for furthering the causes of abolition and women’s rights.

The first American “Woman’s Rights” Conference held at Seneca Falls, New York, in 1848, was a largely Christian event. It was held at a Methodist Church. Most of the organizers were Quakers, and the majority of attendees were professing Christians.
Margaret Fell advocated not only for freedom of conscience in worship and religious matters, for which she was imprisoned on more than one occasion, but also for the right of women to preach the gospel, teach the Bible, and participate in the affairs of the church on an equal basis with men. No one who reads her writings can doubt her high esteem for God and his Word, the Bible.
Jesus said, “Wherefore by their fruits ye shall know them.” What are the fruits of Margaret Fell’s labors? Following Fell’s example in the seventeenth century, history records that in the centuries to come, the voices of “Friends” are heard speaking out against societal injustice and were instrumental in effecting many changes that to this day benefit children, women, and men.

According to Angelina Grimke, an abolitionist and member of The Society of Friends herself, the very first Quaker voice raised against slavery was the voice of an American woman who lived during the 1700’s. Because of her outspoken stance against slavery--before it was acceptable or popular to do so--that courageous woman was excommunicated from her Quaker fellowship, but stood her ground until her death.[3] She made such an impact, that after her death, the Quakers never excommunicated another Friend for speaking out against slavery... but rather for owning slaves.

Such is the legacy of Godly women who dared to stand against false religious tradition and corrupt public opinion.
[1] The Society of Friends is known more commonly as the Quakers
[2] Women's Speaking Justified, Proved and Allowed of by the Scriptures, All Such as Speak by the Spirit and Power of the Lord Jesus And How Women Were the First That Preached the Tidings of the Resurrection of Jesus, and Were Sent by Christ's Own Command Before He Ascended to the Father (John 20:17), by Margaret Fell, 1666
[3] “They know that the first Quaker who bore a faithful testimony against the sin of slavery was cut off from religious fellowship with that society. That Quaker was a woman.” Angelina Emily Grimke, An Appeal to the Christian Women of the South, 1836 ... ......   This book traces history of women’s rights, much further back than usual, to the very first feminists…who were Christians—godly women, who brought the issue of women's rights to the forefront as they struggled to alleviate the suffering of others, and found they were hindered in doing so for no other reason than the fact of their sex. This work provides valuable historical insight into Christian initiatives in the movements for women’s rights, that are rarely included in Christian literature.